has no contamination with other wines of normal production, it is a seducer that tries to seduce with the eddies that form in the glass when it is poured ...

The ViaMari10 has no contamination with other wines of normal production, it is a seducer that tries to attract seduce with the eddies that form in the glass when it is poured.
It is a vehicle of seduction in the noble sense of the word, it is what should lead us to know ourselves better. The ViaMari10 plunges into this concept. When bringing a glass of it closer to the mouth, it offers the exalting fruit of its vineyard, which from the Byzantine land finds home Reggio Emilia’s original settlement, the Latin Gromae Locus.
This helps to break the very idea of ​​tonal wine, being a pure wine that takes on itself a surplus of power and relative strength, touching territories normally reserved to religions. The ViaMari10 is a revelation, a visionary prophet which becomes a symbol:
it no longer represents what you see, but behind what you perceive, it represents the symbol of hidden truths that belong to human history.

ViaMari10 is a tool to promote the development of human virtues: man does not need rights, but values. ViaMari10 bends nature’s cunning making it a goal for man, transforms fermented grapes into art and subverts what has no purpose, into something that makes sense to us, using human labor and ingenuity as pivot. The aesthetic canons of wine will soon be rewritten and will sweep away those non-human wines of which we are surrounded. Our relationship with things must change, the work of art that becomes a monochrome wine is not an inanimate liquid. The ViaMari10 you sip is a psycho-wine, a masseur for our brains, for our gray matter, atrophied by conventions and one direction thought patterns, which study man to transform it.  Thus behold, ViaMari10 becomes living creativity, simulacrum of contemporary reality contradictions. In the vintage year printed on the bottles there is not a simple record of the wine vintage, but the feelings and memories lived by the author that year. The vineyard is an ideal place to make any connotation undefined, it can become the starting point to create this feeling of total suspension, between heaven and earth, between concreteness and dream, in a sentimental dimension, in the beauty of air.
The daily look of the Via Mari 10 vineyard is actually a science of the absolute that does not exist and what seems so tangible, is probably likely to be the most impossible. In reality Actually, it seems to us very real, true very true, but it is a pure world of imagination. An alcoholic fantasy that makes us think that a sort of perfection in fact exists in this world, but this is only a device of the art held in the bottle of ViaMari10.

ViaMari10 is a human activity that takes a stand employing solar energy to produce renewable art, a new production of wine every year. Inspiration must nourish and make survive, the first approach occurs through the contact with the lips of the one who drinks it, in this encounter there is the sum of the primitive elements, such as the wind and the sun, natural ingredients that start all over again from wine.  The Via Mari10 changes the way of perceiving the vital energy of creativity.
Each bottle of ViaMari10 becomes a self-portrait of those who taste it and if after having drunk it one dreams of something; it is simply the artifice that is transformed. It is not a wine, it is a mental space, a cultured nourishment, a living creature endowed with a soul that changes according to its nuances, which tends to take us to a before- consciousness dimension. It transforms light from a secular connotation, into a sacred, emotional, mystical liquid. This wine is a form of ontological ingenuity, thought, action, digestion. ViaMari10 is an energetic composition, not a passive element, but a productive one of intellectual intensity. Physically this art work is subject to change and therefore reacts to the user, it is a living principle that can make the beneficiary intoxicated: art can also be a danger! Bottles stored in the cellar are like paintings waiting to dry. Each bottle must resound and from this sound a note can no longer be extracted, from this music comes the surprise that becomes wonder, which continues to act on our lives with its incomparable energy. The universe of art is bigger than we imagined, but it is always bigger than we think because it is constantly expanding and making everything crumble. A work of art, cannot be considered as such, if there is not at least someone, who says that it is not.
Is the ViaMari10 a bottle of wine or is it a representation of a bottle of wine? or the two questions perfectly coincide with the object to which they refer?
What was considered not real, now seems more concrete to us than what we thought to be real and true, which now seems less obvious to us: it is the cunning of possibilities. Every age has certainties, once it was believed that the earth was flat, now that it is round; there are hundreds of hidden beliefs that we take for granted and that may not be true. In many instances, historically, similar beliefs have been proved false, so it can be assumed that many of the things we take for granted in the world are not true because we are trapped in such preconceived notions.
ViaMari10 is not a bottle of wine, it is a Combine of 33 specimens, but with a very close relationship with the intimate self of us who taste the content, with what happens inside us, it creates what happens outside us. ViaMari10 brings together these two objective realities. Inventiveness is an illusion from which we cannot free ourselves because man always creates  new realities since  he does not how to bear  abstaining from the chemistry of art, even though he may not grasp what it actually is,  but he has experienced as existing, therefore everything that is organic is enclosed in the bottle, everything else is outside.
The ViaMari10 is a winepsycho. 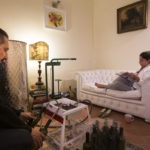 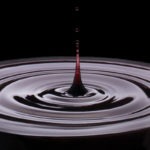 A close up shot of red wine with ripples