that moves into the city’s historic center suspended in the clouds, emancipates and becomes stateless without terroir any longer, but, just because of this, capable of representing Italy even more ...

The Sangiovese vineyard that moves into the city’s historic center suspended in the clouds, emancipates and becomes stateless without terroir any longer, but, just because of this, capable of representing Italy even more. The grapevines soil inside the pots, is a mix of clay, limestone, gravel and siliceous soil that comes from all Italian regions. The grapevines stem from the ground, in the internal courtyard, climb upwards to reach the vineyard’s terrace, and yet they sink their roots literally in the Roman Empire, in the vestiges of the ancient Regium Lepidi, the Roman ancestor city of todays’ Reggio Emilia and they feed on history, bringing it back to life. The vineyard in the city center is perplexing for rational thinking, an unexpected reality that truly creates a mental dimension of the vineyard. Removing a vineyard from the environment usually surrounding it and taking it on the top of a building, surrounded by the red roofs of the city, creates a sense of displacement, a surprise for our rationality and invites our gaze to a metaphysics of the place, of a vineyard stemmed from creativity. The vineyard suspended between the mists of the city transforms itself towards a conceptual direction and creates a tactical artifact. It changes under our eyes, it is no longer a vineyard, but an artistic installation that allows us to understand the difference between a simple vineyard and the cleverness of a multi-sensory reality. Communication between the grapevines and the man who grows them is a real fact.

The grapevines are fed with eggs, bananas, seaweeds and nightingale droppings, in addition to the voices of the different ethnic groups present in the neighboring apartments, the quarrels, the curses in the most diverse languages, in the various dialects of the world enriching and contaminating the grapes, which are never deaf to such variety of sounds as they are in the solitary vineyards in the countryside. All this makes the ViaMari10 a hedonistic asset of great quality. When dew and rain drip from the sky, the soil of the ViaMari10 welcomes their revitalizing power as the one of a savior. The landscape in front of the vineyard is moralized, made of impervious obelisks, rugged spiers, inaccessible bell towers, narrow streets and crooked streets, deserted squares and busy squares, warning of what must be faced by those who want to live in our cities, which every day offer a landscape of our civilization looking like a true, fascinating show . Thus, the ViaMari10, which expresses its thesis with its flavor, like a poem expresses it with words. The landscape is important for its being unique and recognizable, for being an ideal place, yet, at the same time, it becomes a no longer recognizable place. Therefore, the vineyard seen from the world is not the world seen from the vineyard. A perception of the universe in which the vineyard is located, in which
it thinks, in which it moves, which characterizes it deeply, belongs now to its cultural genetic makeup: a vineyard that produces a wine for a new kind of man.
The vineyard is entwined with art as a true conquest, in fact the two trellises on which the vines climb and the grapes ripe on their vines, are two art works by Oscar Accorsi.

They are built as the double helix of DNA, used as a visual pattern. The two sculptures are not the same, they have a different rhythm: one is double the other. Seen in a longitudinal sense, the structure is perceived, but in an orthogonal sense, what we see is, for musicians, the graphic representation of two sound waves, with their elliptical fluctuation in the negative and positive phases. The width is the same in the two structures and, given the ratio, they become like a key note and the other at the octave above or first harmonic. This compound of harmonious elements ensures that the grapes are enhanced with this musicality and, when they are crushed, in the pressing they resonate. So, before opening a bottle of ViaMari10, you have to make it vibrate with the musical notes, placing it close to a violin case, so that inside the glass it will be visible the spectacle of the sound waves making vibrate the organic molecules still asleep for the wine long aging. Although the metaphor of the sound wave is used, these are, above all, informal considerations , the representation of wine is not the aim, but rather the creation of a shape and a color endowed with an internal sound that echoes with the images of a spiritual world representation to cause vibrations in the soul, compatible with the effect of music.
Technology is becoming organic and nature is becoming technological, the vineyard on Via Mari 10 is forcing history to pass through these 20 square meters of terrace. 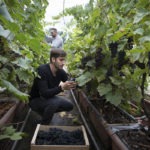 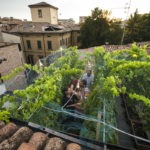